It’s a sunny morning for the most part, but quite breezy! The campground is nice and quiet, and I get to sleep in! Brian gets caught up on his journal and Mom has a new book to keep her busy! We spend a very lazy day today, but do venture out for lunch.

The bus system in the park is very efficient and we use it to go into the visitor center. There is no charge for the shuttle service, and it will take you anywhere in the park including the furthest point you can drive your personal vehicle into, Savage River camp ground. This will work exceptionally well for us, since we didn’t bring our Jeep!

The visitor center is quite interesting, and also has a bookstore and restaurant. They have a short movie in the amphitheatre about the park and its habitants. I would highly recommend seeing “Heartbeats of Denali” as the scenery in the film is just spectacular! The park was originally established in 1917 as Mt McKinley National Park and was the first national park established after the creation of the National Park Service. It was originally founded to be a refuge for the Dall Sheep which were found in the rocky crags of Mt McKinley, and also to protect the surrounding lands. The name “Denali” in the Native dialect translates roughly to the Great One, and this mountain fills the bill! The mountain looks surreal, and after seeing it in person it still looks like a majestic mirage! 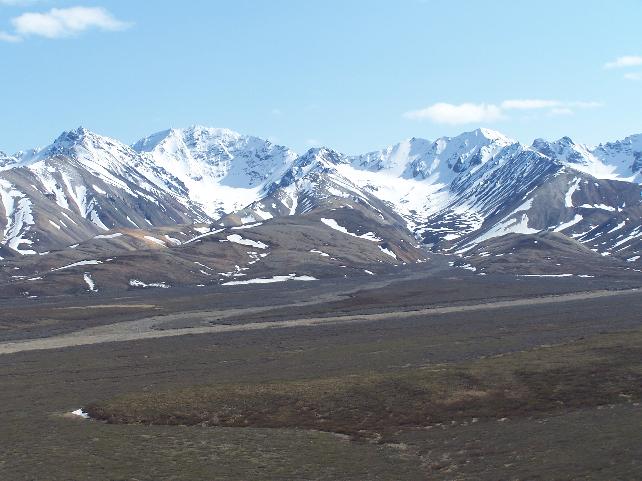 There are several options for transport into McKinley Village, including the Princess and Holland America tour buses, and the red or blue buses which have a posted schedule at the visitor center. We catch the red bus, and head for “The Salmon Bake”! It is quite breezy and we wish we would have gotten off at a closer stop.

Mom isn’t interested in the Salmon Bake and tries the Thai Salmon Wraps. This is a real stretch for her, and we can tell when they arrive it isn’t at all what she envisioned! Mom is a real trooper though,and doesn’t complain. I am happy with the Fish Taco’s! Who would have thought Alaska would have a fish taco? Brian doesn’t care for fish so he’ll have leftovers later at home. A nice thing about “The Salmon Bake” is they have a van and shuttle us back to Gozer after lunch so we don‘t have to fight the wind again!

I head over to the Mercantile to do a load of laundry, and Brian calls our friend over in Kenai–we’ll see him and his wife some time next week! Check our e-mail and do some reading-nice lazy day!