It’s Monday June 12th! We enjoyed our week in Denali Park, and were very thankful we had a clear day to see Mt McKinley. Most park visitors don’t see it during their stay, so we felt fortunate.

Our day began at the dump station and Brian got a nice shower at the fresh water station! Nothing he could do to regulate the water spraying all over the place at the hose connection and filling was very slow. But it did give him some extra time to dump our black and gray tanks and rinse them out thoroughly. We left the park at 6:15 am.

Driving south along the Parks Highway we encountered a dead moose along the road, but he was not alone! Several folks were field dressing him! We later found out that the Native People are notified by the authorities when they have accidents involving wildlife and the locals are allowed the animals as part of their subsistence programs.

We cross Broad Pass (elevation 2,400 ft) and you can see a old airport airstrip to the west. Summit airstrip was built at the beginning of WWII. It was considered to be invulnerable to enemy aircraft due to it’s inland location. It was used as a P51 Mustang fighter base and was supplied by the railroad, since the highway hadn’t been built yet.

We did happen upon the East Fork Chulitna Wayside rest (courtesy of the Milepost magazine!) and it looked like a good place for breakfast. After our cereal, we took Casey for a walk and discovered a campground with blacktop sites, fire grills/rings, picnic tables, and toilets right next to the Chulitna river! Looked like a wonderful place to spend the night!

We do stop at the Denali View Campground (Denali State Park) in hopes of taking a few pictures of Mt McKinley from the south. Unfortunately the heavy cloud cover had the peaks completely socked in. Thank Goodness for a large photo interpretive board of the Alaska range, Mt.McKinley, Moose’s Tooth, and other mountain features. We initially though maybe we’d stay in the campground here, but it’s just a parking lot and you are packed in like a sardine for $10 a night. Even though we are traveling relatively early in the season and haven’t encountered a lot of other campers, we would prefer a little different surroundings They did have trash and toilets but we decide to keep going south.

We didn’t take the Talkeeta Spur highway as the weather doesn’t look very conducive to sightseeing!

We are beginning to see more people and structures than we’ve seen since leaving the United States! There’s even a Wendy’s restaurant at Wasilla! Mom and I go in to order our lunch and Brian and Casey get a little walk in. It’s just starting to rain as we enter the restaurant, and raining in earnest as we leave. We have our lunch “to go” in the motor home, and then on to visit a friend of Mom’s who moved here from Bellingham.

Good thing we’d had lunch as dessert was waiting for us! Peach cobbler with vanilla ice cream, and coffee! Stayed a couple hours and had a very pleasant visit! They too have moose in their yard frequently! Went to the Alaska Museum of Transportation and Industry but unfortunately they are closed on Mondays!

The Iditarod Trail Dog Sled Race Headquarters is here as well, but with the rain we’re not eager to visit it!

Thought we should pick up some groceries as it looks like we may have returned to “civilization”! The Fred Meyers Grocery was a welcome sight too since they’re all set up the same and Mom and I could make short work of our shopping list! The rain continues!!!

Time to hunt a place to stay….

We did find a nice place to park not far from the turnoff to Anchorage on some private property. We did ask and were granted permission to stay, but were requested not to share this location as they don’t want to become a popular overnight destination. There are several RV parks in Wasilla–check your Milepost magazine!

We even got to watch a little television, first time we’ve seen any since Whitehorse.

Road Notes: Pretty good roads today but a few frost heaves. Picked up some traffic at Talkeetna turnoff and the road was quite busy until we hit the 4 lane east of Wasilla. 3 area’s of road construction today but we were early enough to miss out on any delays. The 4 lane we’ve encountered is like any Interstate highway in the US and 65 mph. The mountain scenery was fabulous on this stretch of road! 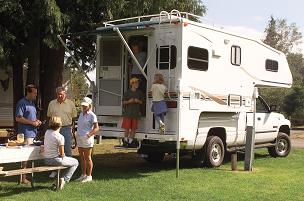